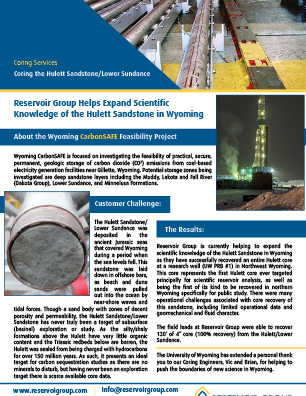 Customer Challenge: The Hulett Sandstone/Lower Sundance was deposited in the ancient Jurassic seas that covered Wyoming during a period when the sea levels fell. This sandstone was laid down in offshore bars, as beach and dune sands were pulled out into the ocean by near-shore waves and tidal forces. Though a sand body with zones of decent porosity and permeability, the Hulett Sandstone/Lower Sandstone has never truly been a target of subsurface (basinal) exploration or study. As the silty/shaly formations above the Hulett have very little organic content and the Triassic redbeds below are barren, the Hulett was sealed from being charged with hydrocarbons for over 150 million years. As such, it presents an ideal
target for carbon sequestration studies as there are no minerals to disturb, but having never been an exploration target there is scarce available core data.